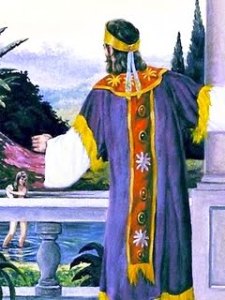 The account of David’s sin with Bathsheba is often used to teach about temptation, especially sexual temptation. I will agree this is a great story for us to use, but often, there is a great lesson to be learned in the from the text proceeding the story.

“And it came to pass, after the year was expired, at the time when kings go forth to battle, that David sent Joab, and his servants with him, and all Israel; and they destroyed the children of Ammon, and besieged Rabbah. But David tarried still at Jerusalem.” -2 Samuel 11

Interesting isn’t it? The author made it a point to state that David “tarried still at Jerusalem.” Traditionally, in David’s time, kings would go to any battles in the Spring with their armies. In previous chapters, you will see David leading his army into battle. Why this time did he stay home? No one knows the answer to that question, we just know the outcome. I believe there is a good lesson for men to learn from David’s epic fail, and essentially, the epic fail of most of us who call ourselves Christians.

The very minute we decide to get off the battlefield and tarry around or hang back is the very second we open ourselves up for temptation. Although we do not do physical battle, we do have battles we fight as outlined in Ephesians 6. We have continue to immerse ourselves in the Word of God daily and if we don’t, it is the same as us staying off the battlefield. We open ourselves to potential attacks, the sneakiest of kinds.

Here are some quick items to walk away with:

In His Grip,
-Pastor J